Engage at Every Stage

Where and how mobile relationship marketing is being embraced across industries

With approximately 5 billion users globally, the mobile phone represents one of the most pervasive channels of communications and targeted engagement in the world. The immediacy, convenience, and personal attachment to mobile phones make the device an ideal means of expanding marketing messages and enhancing engagement with a global customer base.

To address this large and rapidly expanding market of underserved mobile users, The Chief Marketing Officer (CMO) Council along with the Mobile Marketing Association will explore where and how a new discipline -- Mobile Relationship Marketing (MRM) -- is being embraced across multiple industries to ensure continuous customer touch and interaction, sustained support and service, closer and more dependent connectivity, as well as greater insight and intimacy. It will also look at how MRM is creating business value, improving process efficiency, triggering product consumption and use, furthering loyalty and repeat purchase, and increasing customer feedback, assistance, affinity and advocacy. 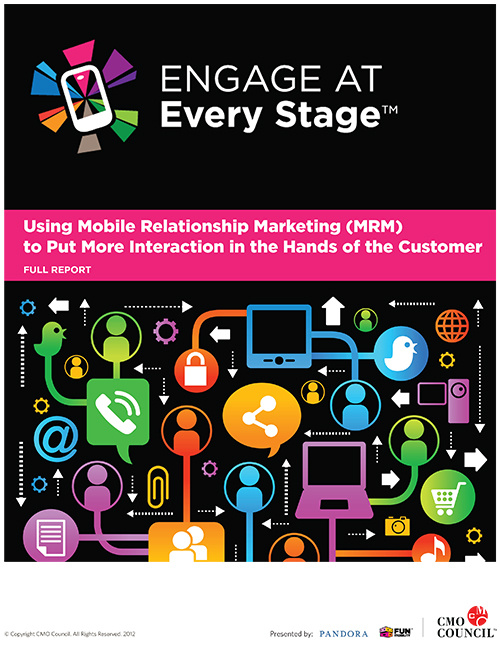 Engage at Every Stage: Using Mobile Relationship Marketing (MRM) to Put More Interaction in the Hands of the Customer

This initiative explores where and how mobile relationship marketing (MRM) is being embraced across multiple industries to ensure continuous customer touch and interaction, sustained support and service, closer and more dependent connectivity, as well as greater insight and intimacy. ... More

While 36 percent of marketers say that the market has become more cluttered and confusing over the last five years, both online and offline, 31 percent say that they are able to provide better customer experiences due to the accessibility of customer intelligence that enables them to become more relevant to customers.

U.S. Digital Future in Focus - Key Insights from 2011 and What They Mean for the Coming Year - Comscore

The Promise of Open Mobile - Deloitte

Hello, Are You There?  Marketing in a Smartphone World - Design Lounge

A Study on Consumer Switching Behaviour in Cellular Service Provider: A Study with Reference to Chennai - Far East Journal of Psychology and Business

NEW! How To Use Mobile Messaging in Retail - CMO Council

Why Video Marketing is the New Darling of the Marketing World

February 2012 - What Does The Future Hold For Mobile Marketing SEO? - Forbes

February 2012 - 'Only 16% Of Marketers Have Mobile Strategy' - Marketing Week

January 2012 - Mobile Advertising Works -- So Why Is Nobody Doing It? - Social Media Today

January 2012 - Over 85% of Marketers Plan To Raise Their Mobile Budgets - Clickz.com

October 2012 - 'SoMoBiDa' Isn't A Song: Like It Or Not, The Confluence Of Social, Mobile And Big Data Is The Future of Marketing - TARGET Marketing

October 2012 - In Mobile-Computing Boom, A Battle Rages For Marketing - Reuters

August 2012 - The Basics Of Marketing Through Mobile Music Apps - iMediaConnection.com

June 2012 - The Casualties of Mobile: What It Takes To Survive In The New Mobile Era - Mobile Marketer

May 2012 - B2B Marketers: Your Targets Are Mobile - eMarketer

May 2012 - Mobile Payments Not Yet Ready to Go Mainstream - MarketingCharts

May 2012 - Personalization is Key to Mobile Commerce Success - Mobile Marketer

April 2012 - Will Smartphones Account for Most Visits to E-Commerce Sites by 2014? - Internet Retailer

March 2012 - From Zynga to Flipboard: Why All Eyes Are on China For the Next Mobile Boom - TechCrunch

February 2012 - How to Master 'In the Moment' Mobile Marketing - imediaconnection.com

February 2012 - How to Crack the QR Code for Mobile Marketing - Entrepreneur.com

February 2012 - Why Context is King in the Future of Digital Marketing - Mashable.com

October 2011 - How to Boost Engagement with Mobile Apps - Mobile Marketer

February 2011 - Most Purchases, Half of Transactions to be Mobile by 2015: Google - Direct Marketing News