Driving eMarketing Performance With the Right Platforms, People and Processes

Acceleration has 12 years of technical expertise in designing and delivering digital marketing solutions that provide quick improvements plus long-term ROI. The company architects digital marketing and publisher ad solutions, implements and integrates optimal technologies, and orchestrates efficient operational delivery to keep companies up to speed with multi-channel consumer engagement and ahead of the competition. Acceleration has a breadth of prominent technology vendor partnerships across analytics, mobile, social, email, and advertising systems, as well as an extensive client base featuring many of the world's largest digital marketers and publishers. Acceleration has experts located on four continents with local and global capabilities to deliver proactive digital solutions. Learn more at www.acceleration.biz.

The Society for Marketing Professional Services (www.smps.org) represents a dynamic network of more than 6,000 marketing and business development professionals from architectural, engineering, planning, interior design, construction, and specialty construction firms located throughout the United States and Canada. The Society and its 50+ chapters benefit from the support of 3,700 design and building firms, encompassing 80% of the Engineering News-Record Top 500 Design Firms and Top 400 Contractors. SMPS’s mission is to advocate for, educate, and connect leaders in the building industry. SMPS is the only organization dedicated to creating business opportunities in the A/E/C industry.

With more than $1.5 trillion spent on marketing and communications worldwide, there are significant incentives for global enterprises to improve the way they allocate, optimize, and justify spend. Functional marketing silos are being imploded and tightly connected for improved collaboration, integration, workflow, and use of critical data using advanced marketing automation platforms.

Determining the optimal way to go to market has never been more challenging. A multitude of new media channels and online/mobile avenues of market access are fragmenting media buys. Channels of distribution are multiplying, requiring broader, more diverse, and customized marketing support. Sophisticated customer information gathering and database marketing techniques are seeing big shifts of marketing resources in areas that allow for improved behavioral targeting and personalization to optimize response and revenue potential.

Customer expectation in the digitally driven world demands targeted, relevant, and meaningful engagement at every turn. As more customers consider defection from brands because the information, content, services, promotions, and engagements lack relevance and resonance, marketers must look to data-driven strategies that deliver the right message to the right customer at the right time—and in the right channel. This is data-driven precision marketing. 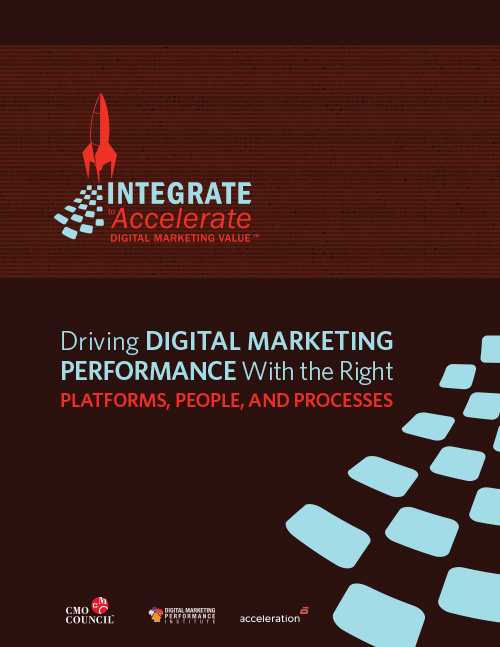 This report also provides a view into the characteristics of data-driven, digital marketing integration leaders, as well as an 18-month plan outlined by the experts at Acceleration to kick-start an integrated digital marketing architecture and framework. ... More

Targeting and personalization, a new option in this year’s survey, also is a focus for digital marketers, with 37% citing it as top-3 priority. Some areas taking a step back from last year include content optimization (31%, down from 39%), brand building/viral marketing (26%, from 32%), video marketing (9%, from 21%), and social media analytics (9%, from 19%). Connected TV, also a new option this year, failed to garner a vote. MarketingCharts

In 2013, 39% of in-house digital marketers surveyed tabbed content marketing, up from 29% last year. Tied with content marketing at the top of the list was conversion rate optimization (up from 34% last year), slightly ahead of last year’s leader, social media engagement (38%). MarketingCharts

Almost three out of four businesses (71%) plan to increase their digital marketing budgets this year, according to stats included in the new Econsultancy/Responsys Marketing Budgets 2013 Report. eConsultancy

82% of the U.S. marketers are expected to increase mobile media marketing strategy by 82% followed by social media 76%. Well this co-relates with another report where marketers are not actually ready for mobile marketing. dazeinfo

Marketers were less preoccupied with turning more efforts toward paid search (search engine marketing) with 59% and email campaigns with 56%, although more than 50% of marketers still expected to increase their focus on these channels as well. dazeinfo

Traditional media has worked well for marketing to Hispanics, but the shift to the digital sphere has also seen changes in Hispanic media consumption. For starters, there are currently over 32 million US Hispanics online; and this number is expected to reach 42 million within the next 3 years. eConsultancy

US Hispanics are also digital critics. Thirty-nine perecent of Hispanics post ratings and reviews of products they've purchased and services they've recieved. They also comment on blogs and websites, while only 15% of non-Hispanics participate in these activities. eConsultancy

58% of respondents said they lacked the skills and technology to perform analytics on marketing data, and more than 70% said they aren't able to leverage the value of customer data. WDM Group

Some 75% of enterprise decision makers polled in a recent survey believe that leveraging data will help their companies dramatically improve their business, yet more than half feel they currently lack the tools to mine true customer insights from the data generated by digital and offline efforts. WDM Group

Data shows new digital media are experiencing a rapid adoption rate - 78 percent of B2B companies, for instance, report using social network marketing - but that marketing measurement is not keeping with the same pace. "In particular," the study claims, "measurement of digital marketing with financial metrics (such as market share, revenue, profit, or lifetime customer value) is lagging. Only 14 percent of those companies using social network marketing are tying it to fianancial metrics." KO Marketing Associates

Marketers are more likely to say that marketing staff (28%) participate in making digital marketing technology recommendations than the CMO (17%), the IT department (14%), and the VP of Digital (11%). MarketingCharts

38% expected to decrease their investment in paid traditional media, compared to just 16% for paid digital media, and 9% for earned/owned media. MarketingCharts

Almost three-quarters of enterprise decision makers report a shift in budgets from traditional advertising to digital in the past year, according to a March 2012 report from DataXu. MarketingCharts

According to Forrester Research, spend related to search marketing, online display advertising, email marketing, social media, and mobile marketing will collectively grow to nearly U.S. $55 billion by 2014. More importantly, as marketers are getting better at balancing channel investments with consumer media time, digital spend will increase from 12% of overall advertising to over 21% by 2014 as marketers shift dollars away from low-performing traditional media into more relevant interactive channels. Forrester

According to online privacy service provider TRUSTe, just 10% of US adults reported being worry-free regarding their online privacy. Though the level of online privacy concern varied in degree, a large percentage of respondents reported significant unease: 21% worried frequently, and 23% always worried about their digital privacy. TRUSTe

Market research company uSamp surveyed 600 social media users who visited such sites at least a few times a week. It found that 28.2% of both male and female respondents said they were somewhat or very uncomfortable with the privacy protection on social media sites, and another 4.2% said they were uncertain. Comparing men to women, by age, a higher percentage of men were very or somewhat comfortable with privacy protection, with the exception of respondents ages 50 and older. Of females that age, 57.2% were somewhat or very comfortable, compared to 45.2% of men ages 50 and up. uSamp

May 2012 - 8 Steps To Digitally Align Your Organization - cmo.com

March 2012 - Digital Marketing to Hispanics in the US - eConsultancy

Ads Must Reach for Content that Aspires to Bigger Ideas

Digital Next: A Blog on Emerging Media and Technology

Ads Must Reach for Content that Aspires to Bigger Ideas

Digital Next: A Blog on Emerging Media and Technology

The Best Digital Marketing Campaigns in the World