Smartling provides an innovative, cloud-based translation management platform that lets companies build a consistent, up-to-date, global presence across any number of websites, web and mobile applications, and languages. By streamlining the entire translation management process, Smartling ensures confidence with high-quality translations every time and reduces time-to-value on globalization and localization efforts. To make sure translations are done right, Smartling delivers real-time visibility and control of translation processes, with management dashboards, in-context editing, localized content, custom workflows and robust analytics. Smartling integrates with existing IT tools and infrastructure, providing a broad set of APIs to allow developers to move content into and out of the Smartling system using industry-standard localization file formats. Alternately, Smartling can capture new content and automatically deliver translated versions of websites, web applications and mobile apps through its secure and reliable global network, with minimal developer intervention. With Smartling, companies can easily engage and manage translators and reviewers in crowdsourcing translation projects, leverage the experience and expertise of Smartling’s certified professional translators—or both.

In this age of the customer-defined experience, language and how we present content to our customers can mean the difference between rejection and transaction. While much focus has been placed on the channels through which content can be delivered, less attention has been paid to the globalization of content distribution and proliferation, as well as how localization has changed content requirements.

According to BBVA Research, the emerging and growth-leading economies (EAGLEs—i.e., the key emerging economies that are expected to lead global growth in the next 10 years) include countries like Brazil, China, India, Indonesia, South Korea, Mexico and Russia. And while research from the Common Sense Advisory indicates that some of these very consumers may be willing to engage with digital channels that are not in their native language, a staggering 72.4 percent of consumers surveyed admitted that they would be more likely to buy a product with information in their own language. More than half admitted that the ability to obtain information in their own language was actually more important than price.

Beyond transaction, customers are also aware that they just might be missing out on an experience. In a Gallup survey on language preference among consumers residing in the European Union, more than one in four Internet users believed they were missing interesting information because websites were not available in a language they understood. This study also revealed that nearly one in five Europeans chose to never browse online content in a language other than their own, and 42 percent say they never purchase products on sites that are in languages other than their own.

This confluence of globalization and customer expectation has created a new need to look at how we globalize the entire scope of the customer experience, from the content we produce to the languages in which we present them across a truly worldwide web. To gain an understanding of how industry-leading brands are tracking, mapping and filling the globalization void, the CMO Council undertook a series of executive-level interviews with senior marketers who are unifying experiences and messages across their brand. The insights from these interviews were aggregated to form the basis of a complete white paper, which is now available for download. 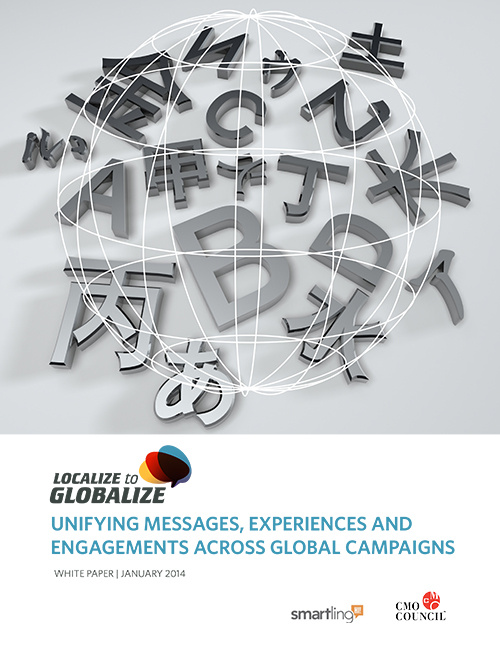 In this age of the customer-defined experience, language and how we present content to our customers can mean the difference between rejection and transaction. While much focus has been placed on the channels through which content can be delivered, less attention has been paid to the complex challenges associated with adapting, packaging and translating content for different audiences, cultures and countries.   More

Mastering the Art of Localized Marketing

Doing Business in 21st-Century India: How to Profit Today in Tomorrow's Most Exciting Market

Consumer India: Inside the Indian Mind and Wallet

The Arab World Unbound: Tapping into the Power of 350 Million Consumers