SAS helps organizations anticipate and optimize business opportunities. We do this through advanced analytics that turn data about customers, performance, financials and more into meaningful information. The result? Fact-based decisions for undeniable bottom line impact – this is how we transform the way our customers do business.

Owning customer insight has become the new mission and mandate of the CIO (in effect, the Chief Insight Officer) as they strive to integrate and extract value from disparate data sources inside and outside the organization. Employing digital marketing platforms, advanced analytics and predictive modeling, CIOs are helping marketers better target and access market segments; improve response, retention and revenue streams; as well as deliver more required and desired products and service experiences. New social network, mobile media and Internet content delivery channels are becoming key determinants of customer voice, affinity and advocacy, requiring new strategies, talents and resources in both marketing and IT organizations.

As leading change agents, the CMO and CIO have to be tightly coupled in the journey to optimize customer lifetime value through more personal, timely, targeted and engaging interactions with diverse audiences. The ultimate objective is “customer relevance,” a state of being that makes brands robust, resilient and highly valued in the market. 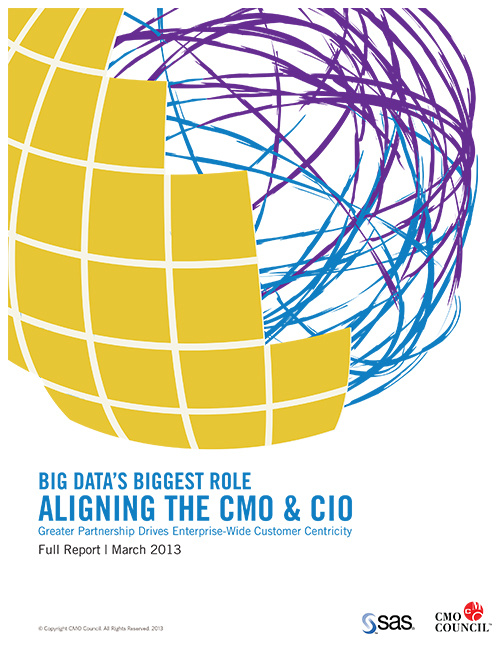 As organizations realize the importance of delivering on a more customer-centric overall business strategy, big data has emerged as the real glue that has permanently cemented the relationship between the CMO and CIO. ... More

IT in Search of Integrated Service Management - FrontRange

CIOs Leading the Way a Discussion on Transforming IT - Service-now.com

January 2013 - Customer-Centricity: Why Engineers Are Not Enough and Poets Are Essential - Business 2 Community

November 2012 - This is the CIO, at Your Service- The Sydney Morning Herald

November 2012 - The CMO's Ultimate Survival Guide: How to Train Your CEO - AdAge

October 2012 - DNS Becomes as a Security Option for CIOs - CIO.com

October 2012 - From Dungeon to Corner Office: Evolution of the CIO, Forbes

October 2012 - The Surge of the Strategic CIO - Forbes

October 2012- Why Some CIOs Have More Staying Power Than Others -CIO.com

September 2012 - Research: The Devalued Future of IT in a Marketing World - ZDnet

Web Analytics 2.0: The Art of Online Accountability and Science of Customer Centricity

The Transformational CIO: Leadership and Innovation Strategies for IT Executives in a Rapidly Changing World

On Top of the Cloud: How CIOs Leverage New Technologies to Drive Change and Build Value Across the Enterprise (Wiley CIO)

Leading in the Top Team: The CXO Challenge